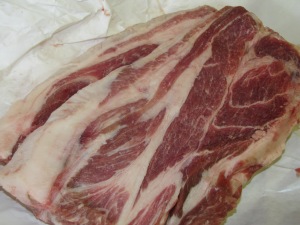 Today I scheduled a large block of time to contend with what to me seemed to be a more challenging cut from our Walking J pork share. The package promised 4.54 lbs of Pork Shoulder Butt Steaks. Why this cut most definitely from the SHOULDER (I mean, it wasn’t a ham, right?) contained the word BUTT was a true culinary mystery I just had to solve.  Apparently, in ye olden days, inexpensive cuts like this were stored in casks/barrels also known as BUTTS. So I guess when thee went to the store to fetch some pork, you ordered some from THE butt. Then over time FROM THE was dropped and we started to simply fetch pork butt. And since I am apparently still 14 and still find myself sniggering uncontrollably every time I say butt, I will henceforth call this cut shoulder so we can proceed with dignity.

The cut looked to be deeply marbled and promised lots of rich flavor but unfortunately rather looked like it should be oven roasted, which to me was out of the question on this 110 degree day. Pulled pork is also very popular with this cut but I wanted something fresh and 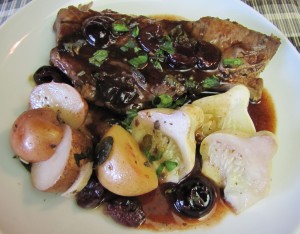 summery that didn’t require slaving over a grill. I thought a light stovetop braise might do the trick without heating up the kitchen. AND I still had some fresh cherries in the fridge I had kept hidden from the monsters. It worked! The resulting feast was incredibly moist without being overly fatty and the sauce was plate-licking good. 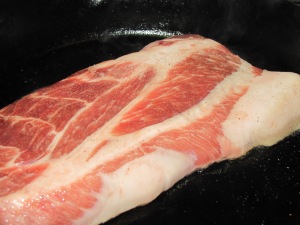 I started by searing off the meat in an iron skillet with pink salt and a little black pepper. Each steak took about 4 minutes a side over medium-high heat to get the rich golden color I was looking for. These were transferred to a large glazed-iron braising dish to await the rest of the yummies. When the steaks were done (my package had 3) I deglazed the skillet with 1 cup of dry white wine and 2 T of balsamic vinegar then added in a fresh, thinly wedged medium-sized spring onion. This I brought to a simmer over medium heat and then doused the 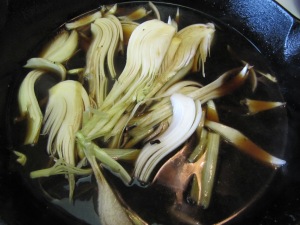 waiting steaks, covered and simmered on extra-low for an hour. Or, if you have a solar cooker, use that you lucky dog! This is a great solar-oven recipe.
After an hour or so, rearrange the steaks and add in 1 cup of 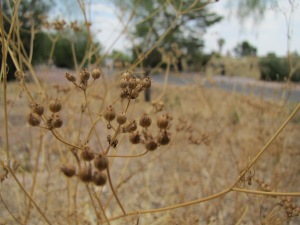 fresh cherries (pitted and halved) and 1 teaspoon freshly ground coriander. You should probably add the coriander at the beginning (like to the pan 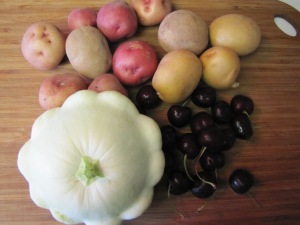 before deglazing), but I didn’t think of it ’til this point and had to wander outside to find some fresh enough to not overpower the dish. And if you’re lucky enough to have Willcox cherries, let me know where and when you got them, because every time I get close, the last handful gets grabbed up right as I arrive. Cook for another hour before adding 12 halved new potatoes and a wedged, medium-sized pattypan squash. Potatoes as fresh as these can take a little longer to cook than you might expect so should be layered with and under the meat. The pattypan, though it can be expected to hold up much better than other summer squashes would, should be mostly left to the top layer in the pot so it doesn’t get (ahem) squashed. If I had 2 pattypans I would have been overjoyed, but didn’t, so had to negotiate for each delectable piece at dinner-time. Add a little salt (particularly to the squash), re-cover and simmer 1 1/2 more hours.

Hungry yet? Don’t worry, we’re almost there. About 4 hours total should have elapsed since you began. Now it’s time for the sauce! At this point, decant the 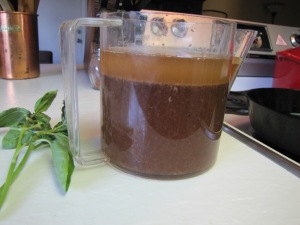 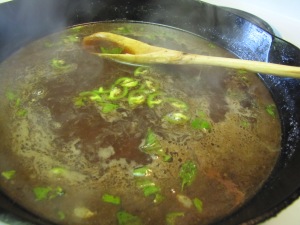 om the pot and set the meat & veggies aside to rest (take a little bite first of course to make sure the meat is fall apart moist and delicious and stab a potato to make sure it’s done). To separate, I used my fancy spouted fat separator device, but you could just as easily skim the fat off the top with a spoon if you don’t have one of these clever majiggers. Put the resulting liquid back in the iron skillet along with 3T balsamic vinegar, 3 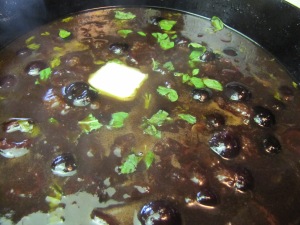 T coconut nectar (or agave nectar or other preferred neutral-flavor sweetener), 1/2 of a jalapeno (sliced) and a couple fronds of fresh pinched basil. Simmer for about 20 minutes. Don’t worry, the meat is benefitting from every endless minute this sauce takes. Add another cup of fresh cherries and simmer for 10 more minutes, until cherries are tender and flavors have come together. Stir in 1 t. tapioca starch dissolved in 1 T water and cook for about 30 more seconds ’til sauce thickens and develops a nice sheen. Finish with 1t. unsalted butter and several more fronds of freshly pinched basil (at least 2T). Plate up the meat & veg, ladle over some sauce, enjoy!

I can’t wait to hear how yours turns out! Got other great pork butt ideas?–come to www.facebook.com/jenfood.az and share!